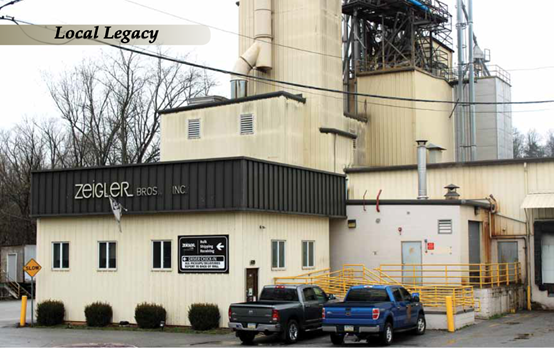 Eighty percent of the seafood Americans eat comes from foreign countries, but there is a good chance before that fish or shrimp was cooked and served, it was eating food made in Adams County.

As you enter the western edge of East Berlin on Pa. Route 234, a horizontally compact but vertically mighty production plant is among the first things you see. The facility is home to Zeigler Feed, an 85-year old company with an international reputation.

Keith Smith, production manager since 2008, is proud to work at the company owned by the third generation of Zeigler men. Zeigler aquaculture feed stands out amongst competitors because of its higher protein ingredients, such as fish meal, poultry meal, and squid meal, Smith said. But there is more to the story than the label and it begins during the big band craze of the 1920s.

Brothers Ty and Leroy Zeigler spent that decade touring the country with their orchestra, grandson Tim Zeigler said. In the 1930s, forces pulled them home to Adams County. Tim explained his grandfather and great-uncle had entrepreneurial spirits. The farming industry was huge in their hometown area of upper Adams County but there was a need for livestock feed. Zeigler Feed began in 1935 as a production facility for livestock food.

In the 1960s, Tim’s father, Dr. Thomas Zeigler, was in charge. The livestock feed industry was much more competitive then so the business needed to be reinvented. He saw a demand for aquaculture feed and headed in that direction.

Dr. Zeigler visited countries where aquaculture was developing, such as Panama, Ecuador and Mexico. Before long, Zeigler Feed became an internationally-recognized name.

“We just went and visited and developed relationships,” Tim said.

Tim and his brother, Matt, now run the business and their father still works in research and development. The brothers have been involved in Zeigler Feeds since they were born but went in different directions during early adulthood. Tim jokes that he returned in the 1990s because he was “cheap labor” during a difficult time.

Zeigler filed for Chapter 11 bankruptcy shortly before Tim’s return. Tim credits the employees for the company’s ability to come out of the dark chapter.

“We had a great team that stuck together. We were able to come out of that paying all of our suppliers and retaining most of our customers,” he said. “It was a downer at the time but when you look back it’s like ‘Wow, we did something few companies do. We came out of bankruptcy and flourished.’”

Three employees - Lee Leer, Faye Weigle and Tim Markey - were recently recognized for working at Zeigler for more than 40 years.

Smith, who returned to the company in 2008 after a previous stint, said he enjoys being part of something so large. About 50 tons of feed is processed at the plant daily and the facility runs 24 hours a day, five and a half to six days a week.

Five licensee operations make Zeigler products outside of the United States — two are located in Mexico, and others are in Ecuador, India and Egypt.

“There’s not too many players in the world that do what we do. We are very unique,” he said. More than 2,000 products have been packaged with the Zeigler name, with about 400 in current production, Tim said.

“A lot of our folks have pride in working for the Zeigler name,” Smith said.

Producing high-quality feeds that are in demand around the world is tough. Since the terrorist attacks of Sept. 11, 2001, the regulations placed on the company have increased the business’s complexities.

Smith finds the work rewarding because a team of people are constantly collaborating to overcome challenges.

“Every day is an adventure. We are constantly adapting to the challenges that we have and having to overcome them,” he said.

Another challenge occurred in 2007 when a plant in Gardners was severely damaged by fire. At the time, Zeigler was producing both there and at East Berlin but since then all production has moved to East Berlin. The production space may have downsized, but the output did not.

“We basically doubled our business in the past ten years. In order to do that, you need good people,” Tim said. “If you have a good base of people, then you have a good foundation to rebuild the business.”

Tim said he sees more growth in the future. He hopes a push to raise more fish and shrimp in the United States comes to fruition.

“There is a tremendous opportunity to grow this seafood in the United States. It’s going in that direction,” he said.

And if the industry grows as expected, hatcheries will be relying on the plant located in East Berlin to feed the fish.

“We are working with people who are community based. That is important and giving back to the community is important,” Tim said. “There is a certain camaraderie that you get in a small town that you may not get if you were in a large industrial complex.”